In today’s USA Today, JJAMZ receive recognition for “Heartbeat”, which is used in the “New MySpace” relaunch campaign.

Check out the new MySpace relaunch video below:

JJAMZ on MTV’s Awkward this Thursday!

This week’s episode of MTV’s Awkward will feature JJAMZ’s “Never Enough” and “Get What You Want”. Tune in on Thursday September 20 @ 10:30PM EST/PST. 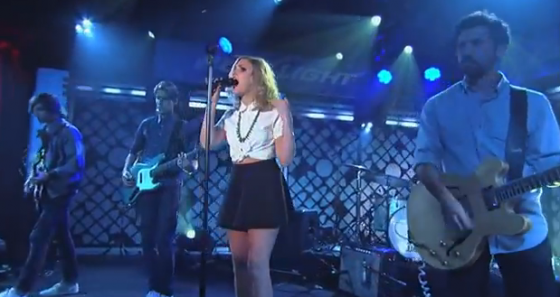 The fine folks over at Spotify had JJAMZ come in to play an intimate session on their Big Green Bus – checkout the video below:

with a name like JJAMZ, you know dudes (and dudette!) are going to deliver the, well, jams, essentially. The indie-pop supergroup — composed of musicians who’ve worked with (hmm, that sounded weird, but it’s true) The Like, Rilo Kiley, Bright Eyes, Maroon 5 andMark Ronson, to name a few — is about to drop their debut album, Suicide Pact. And after hearing “Heartbeat,” you’re going to want to live forever so you can watch the hook-filled, dramatic electro-pop video again.

The video’s definitely trapped in the ’80s, paying homage to the decade’s classic horror movies. After opening with a spooky PSA about girls getting kidnapped, it finds singer Z Berg singing the chorus while struggling to escape the clutches of a creepy old man. Multi-tasking! Like all good slashers, the video ends with a twist… fingers crossed Berg’s heart’s still beating.

Suicide Pact is out on L.A. super-indie Dangerbird tomorrow, with “Hearbeat” available for the low, low price of one e-mail.